[an error occurred while processing this directive]

The late 1980s were golden years for software franchises on the Nintendo Entertainment System. Top developers such as Nintendo, Tecmo, and Capcom were capitalizing on hit after hit with series such as Super Mario Bros., Ninja Gaiden, and Mega Man. Mario, Luigi, Mega Man, and Ryu Hyabusa were big name characters bringing in big time money.

So what better way was there for middle-of-the-road developer Jaleco to break into the spotlight than to combine the features of those other popular games with a franchise character of their own? The resulting title, Squashed, is exactly that.

Squashed is a platform game starring Maru, the loveable ninja character that has appeared in other Jaleco games, most notably the Ninja Jajamaru series. He was thus the only character at Jaleco's disposal that could conceivably be developed into a mascot to lead a successful series.

Maru's appearance was fleshed out for this game; for instance, his size was increased and his cuteness was turned up a notch compared to previous games. Maru was ready to take on any new worlds, enemies, and gameplay techniques that the game's designers could dream up; however, instead of crafting a new adventure, Jaleco took the easy way out and liberally borrowed ideas from other successful action games.

Squashed is thus a pastiche of gaming styles from years past, with few unique features to its credit. In fact, one has to search carefully among the recycled game ideas here to find anything fresh and original. Admittedly, platform games by 1991 had begun to run out of steam in terms of originality; however, Squashed gained its infamy in the ranks of unreleased games precisely for this reason. We'll get to that later, but first, what is the game all about? 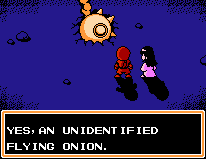 The game opens on a vegetative theme: siblings Maru and Cori are sent to bed early for not eating their vegetables, whereupon they drift off to sleep and dream together. Suddenly, a spaceship crashes before them! "Lettuce check it out," urges Maru. From the ship appears a man dressed as a king. "I yam King Kale," he says, "Won't you peas peas help me?" Yes, the flaccid puns start to fly from this point and don't let up until the very end of the game. Those expecting witty dialogue from this game obviously have never spoken to a game programmer before.

It seems that King Kale needs the pair's help to prevent six worlds from being dominated by a mysterious being known as Vegetron. Every hero needs a nemesis, right? Unfortunately, despite managing to look almost evil in a cute way, Vegetron fails to come across as a threat to our heroes. One wonders how he even managed to dominate his back garden, let alone six planets, with his army of cute robots and "vegetable-themed" guardian minions, the latter of which are vulnerable in the same spots and which can be dispatched with almost the same pattern on each world. This is the same Vegetron who, after a single defeat at the hands of Maru, realizes the error of his ways and chooses to turn over a new leaf in a platitudinous soliloquy which goes on and on. That puts an end to Veggie's chances of reappearing in sequels without some kind of contrived plot twist.

Our two heroes, then, set off on an adventure to save the kings imprisoned by the boss guardians on each of the six worlds. This being a platform game, each world has its own theme and pitfalls that need to be dealt with. These include the anti-gravity of the Space Fortress, fire pits of the Hot Pepper Planet, black holes of the Star-Spngled [sic] Squash, and requisite icy madness of the Frozen Vegetable Section. There is also a seventh world where the final battle with Vegetron takes place.

One plus of this game is that few of the graphics are re-used between worlds; each one has its own pattern set, look, and gimmick. So, in platform fashion, the player traverses each world, uncovers points and power-ups, and defeats enemies by jumping on them or hitting them with some weapon. 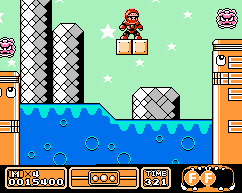 Even though our heroes start the game clad in ninja costumes, they have little in the way of ninja weapons at their disposal. Instead, they have been given a club and hammer with which to smash enemies from above in a manner reminiscent of the Goomba-stomp of Super Mario Bros. or the pogo-jump of Duck Tales. Maru or Cori dies from one hit from an enemy, so the player will have to take care going through the levels. Luckily, a spacesuit power-up that adds an extra layer of protection from enemies can be picked up from early on in the game. However, contact with a boss still spells instant death, so caution is required.

Other power-ups include a rocket-pack with which the player can fly for a short time, a boomerang weapon, a rolling attack just like invincible Mario in Super Mario Bros. 3, and a frog-suit, which serves very little purpose gameplay-wise. Does this sound generic enough yet? Squashed is wholly unremarkable as far as platform games go, and thus a description of power-ups and levels causes it to blend in even more with the platformer crowd.

So, let's get to the juicy history of the game. It has been rumored that Nintendo asked or demanded that Jaleco not release Squashed in North America due to its uncanny similarity to their own Super Mario Bros. 3. It would be hard to deny this point; I keenly remember in 1991 picking up a Game Players magazine containing a review of Squashed and initially thinking I was looking at screenshots of Super Mario Bros. 3.

Take a look at the status bar in Squashed, especially the "(M)x4" graphic and compare it to that in Super Mario Bros. 3: almost, if not completely, identical. The font used for the score and timer is almost the same, too. The final clincher must have been the panels/coins that could be picked up by Maru in the game. They alternate between three values and appear in the status bar on the right side when collected, just like the mushroom, flower, and star panels in Super Mario Bros. 3. Whatever their motivations may have been, it appears that Jaleco went to great lengths to copy elements from the Mario series.

One amusing way to go through the game is to play "spot the stolen game idea." Shall we? We can begin with the Mario series, as the geometric rock formations in the background of Squashed's first world remind one of the trees or hills in Super Mario World. Some of the platforms in the vertical sections of World three of Squashed are reminiscent of similar platforms in Super Mario Bros. 2. An area with stacked blocks and gaps in the same world also caused me to think of the first underworld in Super Mario Bros.

Squashed seems to take further liberties from Super Mario Bros. 3 with Maru's ability to duck and enter some pipes on the ground, and to jump and enter pipes in the ceiling. Also, enemies emerge from pipes in many of Squashed's worlds. Furthermore, there's an auto-scrolling pirate-ship level in this game, which could only have come from one place. Finally, the six different kings being kidnapped and thanking Maru at the end of every stage is all too familiar.

At least the fact that Squashed is a game in the Ninja Jajamaru series helps to explain the frog suit in the first world: in other Jajamaru games, Ninja-kun is seen riding a giant frog. Still, this one distinction does not noticeably differentiate Squashed from games in the Super Mario Bros. series. Even in Japan, Squashed, which was released there as Ninja Jajamaru: Galactic Battle, was labeled a "Super Mario" action game. 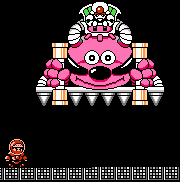 That label, however, would be unfair to other games whose ideas Squashed has cribbed. The pogo jump method of attacking enemies gives off a whiff of Duck Tales; the irritating wall-climbing section, a seeming requirement of any ninja game, in World two is reminiscent of the seminal ninja game series, Ninja Gaiden; the gravity-reversing switch ploy in World seven seems lifted out of Mickey Mouse: Castle of Illusion on the Sega Genesis. Or, to refer to games on the same system, the reverse gravity switch is too similar to Metalstorm or Strider to be mere coincidence. Finally, the end boss of Squashed wouldn't look out of place in Mega Man 3, if the cuteness were toned down a little.

Okay, so Jaleco gets low points for originality. In fact, they seem to have a chronic affliction with the plagiarism bug in their Ninja Jajamaru series. The other platformers are awfully generic, the RPG Jajamaru Ninpouchou has a visual style distinctly like that of Dragon Warrior, and the Ninja character himself is licensed from UPL's Ninja-kun. But let's move past that.

Is Squashed a bad game? Not exactly. It did get an above-average rating in said Game Players magazine (where the reviewer also admitted Squashed's appearance was "very much like [that] in Capcom's Mega Man adventures, or Nintendo's Mario games.") It still retains a bright exuberance that is contagious enough to urge the player to keep trying, at least until the third or fourth world, when the going gets a bit tougher. The graphics and sound are pleasing enough and above-average for a cartoony platform game.

Perhaps it would have been moderately successful had it been released in the West. But, for reasons best left unfathomed, Jaleco didn't release Squashed. For those that need to play the game in cartridge form, the Japanese version is not much different from this US prototype - and at least it spares us from grade-school-level vegetable puns.

There are a few minor differences between the released Ninja Jajamaru and Squashed, aside from the title screen and text. In this proto, there are some glitches in some of the bosses and in King Kale's sprite, where square sections of the characters are missing. Also, at least some of the text is not quite up to Nintendo's seal of quality standards: for example, witness the title of the fourth world, "Star-Spngled Squash." There is also one tiny character error in the intro cinema where the UFO has crashed: up where the smoke meets the edge of the ground there is the letter "F" in blue. This can even be seen in Game Players' screenshot of the same scene, so at least we can guess what version of Squashed prototypes we're viewing here. Needless to say, the glitches are not present in the original Japanese version of the game.

One curious difference between Ninja Jajamaru and Squashed is the choice of letters that make up the panels in your status bar. In the Japanese game, they cycle between "A", "S" and "J". In this prototype, they cycle between "F", "S" and "J" instead. This follows in Nintendo of America's long-standing tradition of preventing children from spelling out dirty words on their TV screens. Nintendo's adherence to such flawed logic always manages to raise a smile.

So there you have it. I have always dreamt of playing Squashed from the time that I saw its review in Game Players, and now we have access to both its incarnations in Japanese and English (if we must call it that). What we can see is a game that is the epitome of the "me-too" developing craze that plagued the Famicom with mountains of inferior platform games, and which would spread to other systems in the form of inferior mascot games. Only this time, Jaleco was caught red-handed by Nintendo of America and thus Squashed was put out to pasture for a long, long vine.